A true blue American cowboy with a boyish enthusiasm for life and strong family values, Ken McNabb grew up in a traditional ranching family in the mountains of Wyoming. This modern-day Roy Rogers knew from a young age that he wanted to help others. As a boy, he was unsure of how he would achieve this, but it became crystal clear when he was 16 years old. Sitting in the audience at a horsemanship clinic, he knew within the first fifteen minutes that horsemanship and teaching was his calling.

Since then he has been changing people's lives through his weekly television show, instruction at clinics nationwide, and special appearances at large expos. He still carries with him the passion and conviction he had as a young boy. Living his life on horseback has proven to be the ultimate way for McNabb to reach out to people and their horses.

Ken creates a unique environment where each horse is trained using gentle methods and the rider is coached to become his/her personal best. Ken's faith in Christ, along with his commitment to strong family values and patriotism, help make him the kind of speaker/trainer people enjoy.

In 2007, Ken competed in and won the Colt Starting Challenge at the Mane Event Expo in Vancouver, WA. In 2008, he competed at the prestigious Road to the Horse competition in Murfreesboro, TN against Chris Cox, Tommy Garland, and Mike Kevil. In typical Ken McNabb style, he won over spectators with his good-natured approach and ability to develop a very aggressive colt into a willing partner. In October of 2008, Ken won the Trainer's Challenge Colt Starting Competition in Chilliwack, BC Canada, beating out Charles Wilhelm and three-time champion, Doug Mills, from Canada.

Together, Ken, his wife DeeDee, and their two young sons, Kurt and Trent, live near Cody, Wyoming where they are dedicated as a family to teaching others to dream bigger, ride taller and live happier. A new partnership with Diamond Land and Livestock Company, a large cow-calf and ranch horse operation in Douglas, Wyoming, has also provided an excellent location for Ken's Three Week Apprenticeship Program as well as his one week Back in the Saddle and Horsemanship clinics. Together, McNabb and Diamond Land and Livestock Company, produce an annual ranch proven production sale featuring 75 or more ranch trained and tested horses.

Josh was born and raised in Mora, Minnesota where he grew up showing in speed and roping events. It was Josh's Junior year while attending the University of River Falls Wisconsin that he was introduced to the sport of reining by Larry Kasten. Upon graduating from college in 2000 Josh married his high school sweetheart Carri. Together they moved to Oklahoma where Josh had the opportunity to work for Bob Loomis under the instruction of Duane Latimer. In the 5 years Josh worked for Loomis he acquired the foundation for a successful open training and showing program. In 2006 Josh and Carri moved to Whitesboro, TX.  Josh was employed by Patrice ST-Onge;  broadening his knowledge of the reining industry. In 2007 Josh and Carri were blessed with the opportunity to begin their own reining training, showing and breeding operation that is located at their home in Whitesboro, TX.  In 2015 Josh and Carri adopted their son Tristan who is clearly the boss of the whole operation :-)

In addition to his training program, Josh also served as an NRHA Executive Board member and on several smaller committees within the NRHA for 6 years.

Ever since he began working with horses as a kid, Todd Pletcher always strived to be the best. Along the way, he has not only succeeded in becoming Thoroughbred racing’s all-time leading trainer in purses earned at $388 million and counting, he’s earned the respect of the entire racing industry with his superior horsemanship and the classy way he conducts himself.
In just over 20 years, Pletcher has already produced a Thoroughbred racing resume of achievement that may never be topped. And he’s still going strong. His statistical accomplishments are astonishing:  a record seven Eclipse Awards as North America’s Outstanding Trainer; 11 Eclipse-Award winning horses, including 2007 Belmont Stakes winner Rags to Riches -  the first filly to take the final leg of the Triple Crown in more than 100 years; and five Triple Crown race victories, two in the Kentucky Derby with Super Saver in 2010 and Always Dreaming in 2017; and three in the Belmont with the aforementioned Rags to Riches, Palace Malice in 2013 and Tapwrit in 2017. In 2019, Pletcher won the $6 million Longines Breeders’ Cup Classic with Vino Rosso.

For history buffs, it should be noted that in 2017 Pletcher became the first trainer to win two Triple Crown races with two different horses in the same year since 1996, when his mentor, Hall of Famer D. Wayne Lukas, did it with Grindstone (Derby) and Editor’s Note (Belmont).

Pletcher does much more than train race horses. He has a handle on all aspects of the industry, from buying, selling, breeding, safety and, of course, competing at the highest levels of the game. Whether he’s in jeans and a sports shirt at one of his meticulously kept stables or sporting a tailored suit at the races, he’s hands-on all the time. Pletcher is knowledgeable about every aspect of the sport and insightful to the point of knowing every detail about the status of every one of the 175 horses he has in training.

Peter began his riding career at 8 years of age and started winning his first ribbons in the M 1.30 by the age of 13, training with top European professionals and competitors.
Peter boasts numerous wins in Grand Prix events throughout Italy, Chile, Austria and the United States, along with top finishes in World Cup competition. Peter, who also holds a Masters in Business Administration (from Institute of Management, Salzburg, Austria) has ridden and trained for an impressive list of top owners & sponsors around the world including:
At the age of 19, Peter went out to work for Hank Melse at his prestigious show jumping barn in the Netherlands.  Later Peter trained with and worked for the great Swiss riders Beat & Markus Maendli, in addition to Willi Melliger in Switzerland
Following his time in Switzerland, Peter worked for a private barn Sportheste Inc. in Woodside, CA which was followed by a term in Chile to ride for Haras Siracusa where he showed throughout Chile and Europe.  Later Peter returned to Europe and worked for Sportpferde Puchner in Linz/Austria.
Currently, Peter is focused on competing and growing Petschenig Show Jumping a Hunter/Jumper facility in Pilot Point, Texas with his partner and fiancé’, Nathalie Cooper. Peter is a regular at all the major show jumping events throughout the southwest and west coast, including HITS, and has an impressive number of Grand Prix wins to his credit.

At age three, Nathalie Petschenig began her lifelong adventure in riding under the guidance of her grandfather, USEF Hall of Fame Inductee, Morton “Cappy” Smith. Her family has built a legacy in the riding community through competitions, running a barn and training others to ride. Horsemanship and the art of riding has always been a family tradition for Nathalie. This love of family, riding and horses has cultivated a genuine passion in Nathalie to help others gain a similar one-of-a-kind experience.

Nathalie is a tremendously successful rider, having won multiple awards for her riding and horsemanship since early childhood.  Nathalie graduated from Mount Holyoke College in 2007, where she won individual National titles in Open Fences and Flat competing on their IHSA team.

Nathalie first started to excel in her leadership skills while captaining the Mount Holyoke Equestrian Team to National Titles. After graduating college Nathalie moved to California in 2007 where she started Acorn Farm and continued developing her strong riding ability winning several west coast medal finals, in addition to successfully competing with new mounts in the upper-level jumpers, placing in several Grand Prix’s, in addition to winning her first Grand Prix in 2015.

As a training and coaching facility, Acorn farm produced top-level Equitation, Hunter and Jumper horses and riders. At Acorn Farms, Nathalie successfully brought students from the lower levels up to qualifying for numerous medal finals including the Maclay Regionals, CPHA, PCHA, along with many other West Coast finals, as well as Jumper Champions and Hunter Derbies.

Now Nathalie is focusing on building the equitation and coaching program at Petschenig Show Jumping, a facility she co-owns with her partner and husband, Peter Petschenig. As a coach and mentor, Nathalie allows her student’s true talent and abilities to shine through in every lesson and show experience. She understands that this success can only be realized through a family-like bond between horse, rider and trainer. 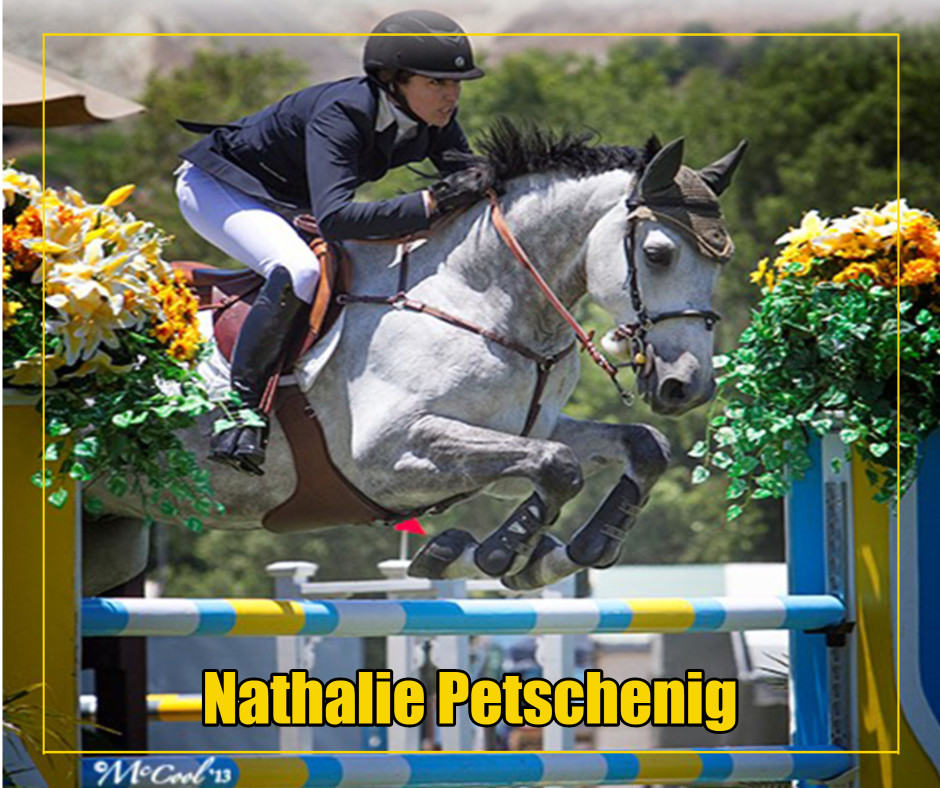 Caroline is a major force in US Eventing. Ever since Caroline Martin won the team and individual gold medal at the North American Junior Young Rider Championships, she has never looked back. She has consistently been on the Top 10 leaderboard, is shortlisted for the upcoming Olympics, has appeared on Nation’s Cup Teams, and was a recipient of the 2017 Karen E. Stives European Developing Tour Grant. Additionally, she has one of the top sales businesses in the country riding on average 10 horses in a show every weekend. Caroline chooses to use Pyranha Wipe N’ Spray and Nulli-Fly for her horses because she knows animals don’t like bugs just as much as the rest of us and she appreciates that Pyranha always strives to provide the highest level of comfort for each of her horses.

Located in Pilot Point, Texas, Highpoint Performance Horses is where head trainers, Charlie Cole and Jason Martin specialize in a variety of events from Trail, Hunter Under Saddle, Western Pleasure, Western Riding, and Pleasure Driving, to name just a few. Both Charlie and Jason are AQHA Professional Horseman. Charlie is a certified AQHA Judge.

They have trained many of the top youth and amateur riders, with a goal to teach their riders how to ride and prepare their own horses. Horsemanship is one of the classes where Highpoint’s students have excelled, winning many Congress and World Championships.  Charlie and Jason stand several of the industry’s leading all-around performance stallions.

Jason first started riding horses at the age of 8 years old and never looked back. He has won 38 AQHA World Championships. In 2019, he was inducted into the NSBA’s Quarter Million Dollar Club. Jason has won the AQHA Leading Exhibitor award 5 times and the APHA leading exhibitor award twice. For the past 15 years, Jason and Charlie have won the AQHA World Championship Senior Western Riding.

Learn more about Charlie, Jason and the whole Highpoint Performance crew at highpointperformance.com